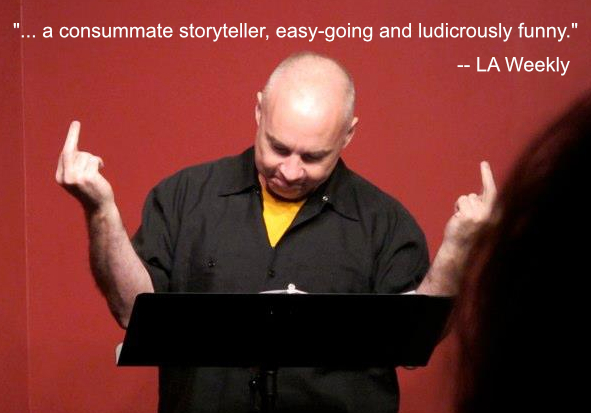 I have been writing & performing solo shows for quite a while. Two shows in particular: “A Punk’s Tale” and “Saints-A-Go-Go” are constantly being lengthened and revised for future performances. I have also been doing shorter pieces at storytelling shows around LA including “Story Salon,”  “The MOTH” and Comedy Central’s “Sit-n-Spin.” I have posted a few live clips at the bottom of this page.

I also have an extensive background in Improv performance and teaching:

In addition to solo shows and (brief) stints of stand-up, in the past decade+ I have performed in countless improv shows here in Los Angeles and around the US. The latest group I’ve been involved in (though we’re now on “extended hiatus”) is called “UNDERBELLY.” We’ve been invited performers at the following festivals:

If musical comedy is your thing, I also wrote and recorded the shamelessly cheesy theme song to Jewell Rae Jeffers’ hilarious TV show: Tastes Like Home.

I am constantly taking more classes, re-reading the improv training classics and lurking in the audience at improv & comedy shows wherever I might be. The concepts of cooperation and “yes, and…” aren’t just bits of stage training, they are the way I look at the world and approach all aspects of my life. We create a new reality every time we agree with a new concept. We create new connections every time we cooperate with each other.

Did I mention that I TEACH Improv too ??

I have taught all levels from beginner to master classes for groups and one-on-one, for both actors and non-actors.  I have also developed an occasional, one-time, one-day workshop I call “Improv for Writers”  which I hope will demystify the Improv process for people who usually do their creating on the page only. I have found that my improv training often helps me overcome many of the road blocks (and writer’s blocks) that can occur when you’re working on a tough script.

Now, about those live clips…