I received the yearly email from the good people at WordPress containing my “year in blogging” review and the numbers weren’t good. I don’t mean the “traffic” or the clicks or the incoming comments. I mean my own performance. I only put up two new posts in 2014. Two. It was that kind of year.

While I did do a lot of things and accomplished some important personal/creative goals, it was still a bit of a down year. I’ve described it to friends as a feeling of “being on hold” for reasons I still can’t quite put my finger on.

I wrote less this year – in terms of completed projects and in terms of pure, raw word count – than I have in any of the past 15 years… and yes, I do track these things with an almost OCD-like compulsion. I won’t cop out and blame “writer’s block” or anything like that, because I have never really believed such a thing exists. Maybe I was suffering from some burn-out, sure, and was just a little tired in an existential sort of way. 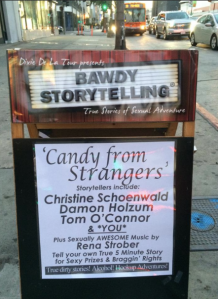 But even through the writing was lacking this year, I did much more than the usual amount of performing. I climbed up on every stage that would have me and did many “spoken word” “storytelling” and “essay” shows, some as a returning guest and some as a newcomer. I also acted (if I dare to call it that) in three comedy shorts that will surely find their way online whenever they finally make it out of post-production. All the performance work was fun and exciting. It also helped fill some of the void I have felt since my improv theater/home of 13+ years closed down (going on 2 years ago.) It is a loss I am still coping with.. with varying degrees of success.

I also helped a lot of friends with a lot of their own projects. I formatted and did the artwork for a friend’s ebook novel.  I must have read & given notes etc for at least two dozen friends’ scripts. I helped with some post-production editing, I even taught a little guitar. So, even though my word and page counts were hovering near-zero, I wasn’t completely shut down creatively.

I’m not sure I want to revisit old ground – like my Ask A Punk blog which, although I loved it dearly, I still feel like I was answering the same questions over and over again. I do hope to re-launch the Another LA Cartoon photo-blog soon, but there are still some technical difficulties that I haven’t figured out how to handle yet.

I will get back to my straight-up screenwriting. I have two comedy features that I set aside in 2014… not because I didn’t think they were good ideas, but because I just couldn’t commit to the writing itself (as I said, this was a new, and difficult sensation to sort out.) I am also planning on launching a podcast later this year, which I know is a pretty ambitious and time-consuming undertaking, but I think I’ve come up with an idea small enough to be do-able, and big enough to be interesting to me, and (hopefully) other people.

…and of course, I plan on being more dedicated to the Planet OConnor blog.

It is a new year people. I know some folks say the whole “New Year, Fresh Start” mentality is dumb because our calendar is really just an arbitrary thing (on a cosmic scale.) But I say ANYthing that helps us consciously note the passage of time and the incredible opportunities that still remain to move forward, grow and improve ourselves, to look outward and create, and help… well, that has to be a good thing.